Hard to believe we finished Week 6! It's been a real challenge homeschooling with a toddler this year. This week, the toddler decided to switch to 1 nap per day, rather than 2.

In Math, the 9yo learned some multiplication tactics for multiplying numbers in the teens. (For instance 4 x 14 can be thought of as 4 x 10 plus 4 x 4). The 7yo did more subtraction with renaming, including numbers that need to be renamed twice (ex: 408 - 279). Both girls struggled with memorizing math facts this week. They would like me to go back to the bean-bag toss, but I've been trying to find ways that they can memorize WITHOUT me being involved. Sigh. With a toddler around, I need as much independent work for the kids as possible. This week wasn't the first time this schoolyear that I've re-considered our curriculum or methods.


In English, both girls practiced rules with nouns (capitalizing, plurals, abbreviations). In History, the kids read about the Ottomans, the Tulip King, and the end of the Indian (India) Empire in Story of the World 3. We skipped Science this week. The kids continued to do Familiar Quotations copywork.


We had a field trip on Wed to Seven Ponds Nature Center. We had co-op on Friday. The girls are loving their classes! I really enjoy teaching the VBScripting class and love to see the teens learning from each other and their creations!


Outside of schoolwork, the girls worked on their own projects. The 9yo completed a newspaper! She took her own photos, searched for clipart to embellish, and did *most* of the typing herself (when she tired out, I'd type for her, but she supplied the words). She did a great job! Pages 1 and 2 are shown below. I'm trying to find a way to share the newspaper online without it being so huge in size! The 7 yo started her own newspaper (I haven't seen hers yet). And the 16mo is making great strides on her "walking" project (no pun intended!). She also started cutting molar #2 by the week's end (yawn, tired mama!) 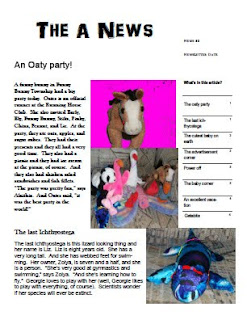 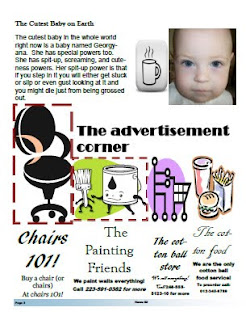